Welcome to Palais Yolande, a luxury self catering holiday apartment in Nice, France

Sleeping 8 in 3 double bedrooms, Palais Yolande is a 19th century, spacious apartment situated on a grand boulevard. It is located in central Nice, overlooking a beautiful park and within a short walk of the famous Promenade des Anglais and the beach.

Palais Yolande has history and one of the most stylish addresses in Nice. It sits on the Boulevard Victor Hugo along with many other architecturally stunning buildings. This grand building is defined by its beautiful carved front doors, ornate wrought iron balconies, shuttered French windows and its domes which are prominent on the local skyline.

Both the building and the surrounding area, known as the Carre d’Or (The Golden Square) provide the visitor with a very French experience and yet all that Nice has to offer is on its doorstep or a short walk, tram or bus ride.

It overlooks the beautiful garden square, Jardin Alsace-Lorraine, which until closing time is bristling with the communal life of the local people.

This spacious apartment has an overall feeling of elegance and light with high ceilings and full length French doors. It has air conditioning for the hot months of summer and is heated in winter. 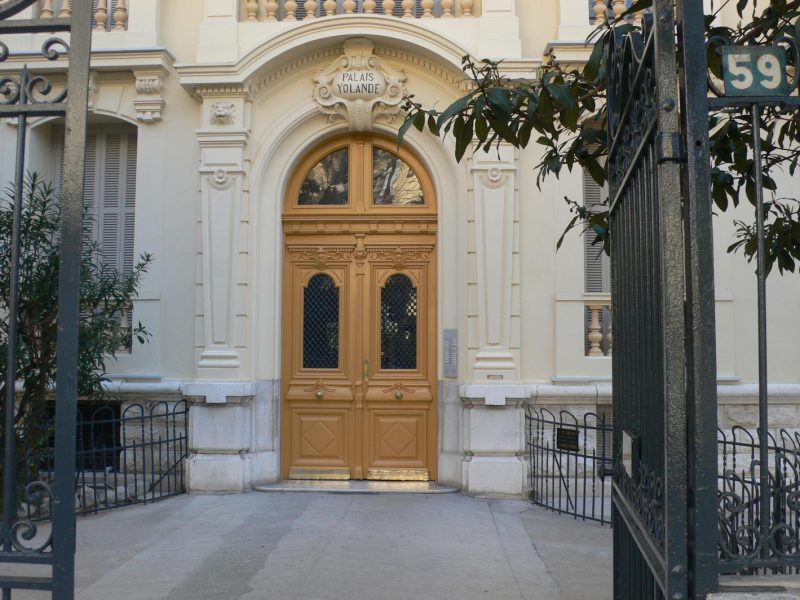 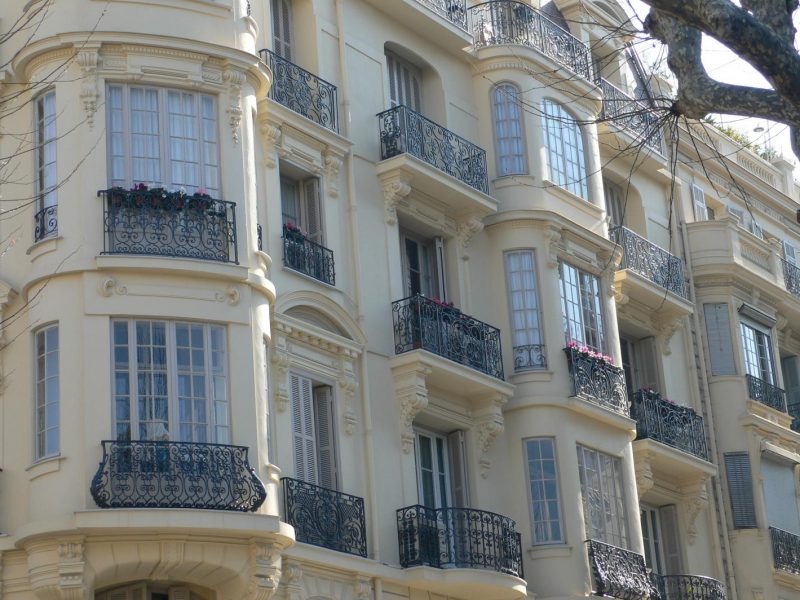 Nice is a magical city with a stunning seaside location; the unofficial capital of the Cote D’Azur.

The city is nicknamed Nissa La Bella and provides just about everything a traveller could want. Whether it is sun, sea, shopping, restaurants, festivals, music, or history, Nice has it in abundance and when it comes to culture in France, only Paris boasts more museums and galleries. Almost everything on offer is within walking distance or an easy bus or tram ride.

Nice only became part of France in 1860 and its mixed heritage gives Nice its fabulous melange of French and Italian, as seen in its architecture, colours, cuisine, language and lifestyle. The English Aristocracy included Nice in their Grand Tour in the latter part of the 19th century. Once the exclusive winter resort for the rich and famous it is now accessible to all.

Over the past 10 years Nice has undergone a major make-over which has made the most of its architecturally stunning buildings and boulevards, whilst adding a new tram system and wonderful civic areas such as the Parc du Paillon (pictured above).

Nice has many faces and provides a holiday for families, friends or couples. It is the seaside beach resort with the beautiful azure waters of the Baie des Anges bordered by the smart Promenade des Anglais. It has Old Nice with its medieval lanes and alleys and the famous Nice market. A shoppers paradise on the Avenue Jean Medicin or the smart boutiques of the Carre D’Or. It has the port where the yachts can be viewed from a port side cafe or the antique shops explored. For the foodies there are cafes, restaurants, deli’s, food markets and plenty of independent food stores at every turn.

Nice is not just a summer location. As mentioned above it was made famous as a winter resort and when the sun is out in January beach restaurants will spring into action. In December there is the Christmas market and when it is snow season in the nearby Alps, daily buses leave Nice for the local ski resorts. February is the month of the Nice carnival, one of the world’s famous carnival events and compared to the Mardi Gras. In Spring Nice is mild and very uplifting – it was the clarity of the Mediterranean light that enticed numerous celebrated artists such as the Impressionists to live and paint in this part of the world. Summer on the Med speaks for itself with the temperatures remaining high until October when the average temperature falls to a mild 64deg Fahrenheit.

As if Nice doesn’t have enough on offer, it is also an excellent place from which to explore. In addition to the Cote D’azur, Italy, Provence as well as the lower Alps are easily doable on a day trip from Nice. The transport connections are excellent with Monaco and Italy to the east, a mere 20 and 50 minutes respectively by train and many famous resorts and towns to the west such as Cannes, Antibes and St Paul de Vence.

My husband has known Nice for over 25 years and decided some 13 years ago to buy a holiday home in the city for our large family. We looked for a long time before choosing Palais Yolande.

Primarily, we felt that the area and Palais Yolande provided us with the French experience we wanted in what is a very cosmopolitan city along with a location which gave us easy access to all Nice has on offer.

We are located in central Nice in the Carre d’Or (Golden Square) district. It is 3 blocks behind the world renowned Hotel Negresco and Musee d’Art et Histoire and a short walk from the beach.